On Friday, April 29, 2016, Tauber Oil Company signed an Offtake Agreement with Primus Green Energy for its methanol plant at a manufacturing site in the Marcellus shale region. The plant is expected to produce 160 MT of methanol per day beginning in the fourth quarter of 2017.

Primus Green Energy is a gas-to-liquids (GTL) technology and solutions company that transforms methane and other hydrocarbon gases into gasoline, methanol and diluent.

Tauber will offtake all methanol produced by the plant – utilizing low-cost Marcellus gas feedstock – to market, sell and distribute into the regional market. The Primus standardized modular system allows for local production, thus saving its customers in the region on both production and transportation costs.   As a result, the systems are cost-competitive with the world-class methanol plants located on the Gulf Coast of the United States and in international markets.   In addition, Interconn Resources, a subsidiary of Tauber Oil Company, will be responsible for the supply of natural gas for the Primus facility. 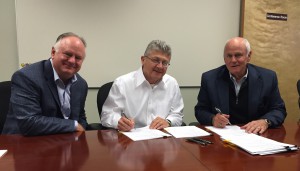